We are having success in getting penalties eliminated or reduced. 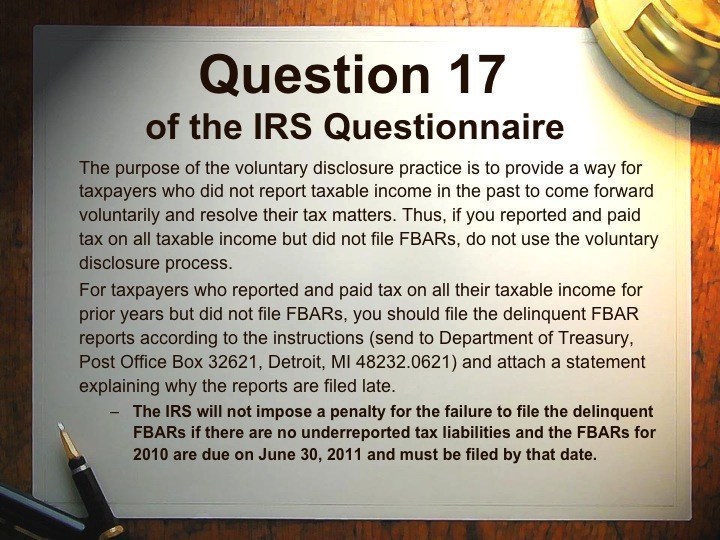 Questions 17 in the IRS question which does say if you have no taxable income and you’ve paid all your taxes on your taxable income, there’s not going to be the substantial FBAR penalty violation that comes with a willful FBAR violation.  That being the case, with no taxes due, you don’t need to be in the amnesty program.  What we had found is people have gone in the amnesty program, and then because of either loss, carry-forwards, or foreign tax credits on foreign income or whatever may arise in these individuals’ situations, that at times even though there’s been foreign bank deposit investment income not reported, we have been able to show that there has been no taxable income.  So that’s one area where there is some deviation if it’s handled in a sophisticated way.

We’ve had success in that area too, at looking carefully at whether there has been a willful violation in the past of the failure to file the FBAR.  We take a very, very careful look at everyone who joins the amnesty program, not just to provide a really excellent product which is the key to the amnesty program but also it’s important to know that we take a look to make sure that we’re not paying more than any taxpayer should be paying under the amnesty program.

If you need help with the new IRS open-ended Amnesty or any of the new IRS laws we can help.

More on Amnesty for Off Shore Banking