Close Menu
+
Tax Lawyer > Blog > Domestic Tax Planning > The Concept Of Willfulness, In The Eyes Of The IRS, by Richard S. Lehman, Esq.

The Concept Of Willfulness, In The Eyes Of The IRS, by Richard S. Lehman, Esq.

In tax law “willfulness” has its own definition and it is an important definition for every taxpayer. That is because a taxpayer who “willfully” filed or did not file accurate tax information can be subjected to numerous very expensive penalties and even criminal liability.

A taxpayer who wishes to be in the Streamlined Program must not have “willfully” failed to report income from any foreign asset and/or failed to file an FBAR Information form.

The IRS test for willfulness is whether there was a voluntary, intentional violation of a known legal duty.

A finding of willfulness must be supported by evidence of willfulness. The burden of establishing willfulness is on the Internal Revenue Service and if it is determined that the violation was due to reasonable cause, the willfulness penalty should not be asserted.

According to the IRS Manual, the innocent failure of an unsophisticated Taxpayer to know the filing requirements for international transactions, coupled with other factors, such as the lack of any efforts taken to conceal the existence of the accounts could not lead to a conclusion that the violation was due to willful blindness. The mere fact that a person checked the wrong box, or no box, on a Schedule B is not sufficient, by itself, to establish that the FBAR violation was attributable to willful blindness.

Willfulness can rarely be proved by direct evidence, since it is a state of mind. It is usually established by drawing a reasonable inference from the available facts.

The government may base a determination of willfulness in the failure to file the FBAR on inference from conduct meant to conceal sources of income or other financial information. For FBAR purposes, this could include concealing signature authority, interests in various transactions, and interest in entities transferring cash to foreign banks.

The Service has given its agents great discretion when the evidence shows that there is not a certain degree of culpability necessary for willfulness and has suggested certain mitigating factors that may determine that a penalty is not appropriate or that a lesser penalty amount than the guidelines would otherwise provide is appropriate or that the penalty should be increased (up to the statutory maximum). These factors to consider can include the fact that a taxpayer was cooperating with the I.R.S. 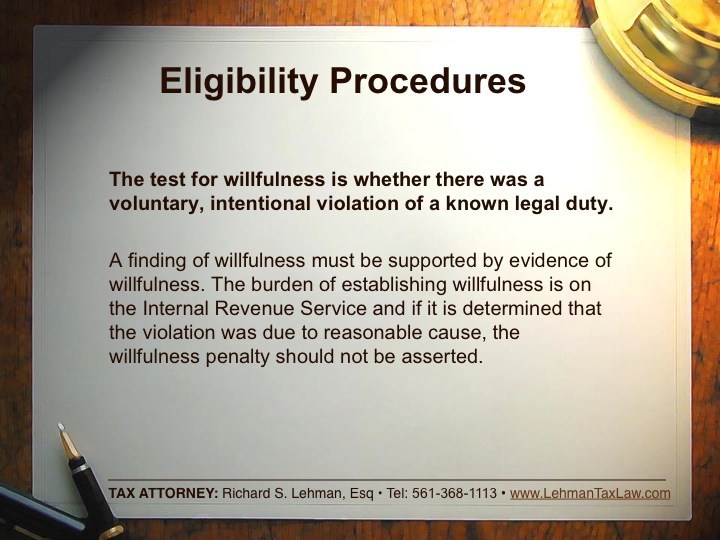 In determining the qualifications for mitigation, the Internal Revenue Service Manual lists the following requirements.

Glossary Of Statements From Decided Cases Regarding Willfulness

Since willfulness can be somewhat elusive to define, the following is a Glossary of statements from various authorities that will shed more light on the meaning of willfulness.

In the course of one of the first cases involving willfulness, the court advised the jury that, to prove “willfulness,” the Government must prove the voluntary and intentional violation of a known legal duty, a burden that could not be proved by showing mistake, ignorance, or negligence. The court further advised the jury that an objectively reasonable good-faith misunderstanding of the law would negate willfulness.

The Supreme Court has long held that, in tax cases, “willfulness” requires proof of an intentional violation of a known legal duty, meaning that there must be some evidence beyond recklessness that a taxpayer was aware of the relevant reporting requirements. A showing that the defendant acted with “careless disregard” is not adequate. Willfulness is an entirely subjective determination.

Another court in affirming criminal conviction for willful tax fraud where tax paperer “closed his eyes to” large accounting discrepancies, willful was said to be proven through reference from conduct meant to conceal or mislead sources of income or other financial information” and it “can be inferred from a conscious effort to avoid learning about reporting requirements. Similarly, willful blindness may be inferred where “a defendant was subjectively aware of a highly probability of the existence of a tax liability and purposefully avoided learning the facts point to such liability.

The word willful “retains its traditional meaning that violation of the Act must be deliberate, voluntary and intentional.” [Other cases] urge upon us still another meaning: that “willful” requires bad purpose as an element of the violations.

Under some statutes, an act is “willful” only if done malevolently, wickedly and criminally. Under other types of statutes, it suffices that the act was performed consciously and voluntarily, rather than inadvertently or accidentally. Betwixt these two formulations, “willful” has been given various other meanings, although shades of difference ofttimes diminish when the probe extends beneath the surface. Because of its inherent instability, only the most careful consideration of the term “willful” in its legislative context can provide satisfactory assurance that eventually it will take on its proper cast.

By Lehman Tax Law | Posted on August 13, 2014
« IRS just announced major modification regarding the Offshore Voluntary Disclosure Procedure (OVDP)
Taxation of the Clawback in a Ponzi Scheme »
Share This Page: