Many American taxpayers are not completely sure about the IRS changes to Offshore Bank and Foreign Asset Disclosure Programs. Here are a few frequently asked questions we have seen lately.

Question 1: If a Taxpayer is concerned that his or her failure to report income, pay tax and submit required information returns was due to willful conduct and who wants more assurances that they will not be subject to criminal inability and/or substantial monetary penalties, should the taxpayer consider participating in the Offshore Voluntary Disclosure Program (OVDP) and not the Streamline Program?

Answer:   Yes. The Offshore Voluntary Compliance Program is a separate IRS Program that waives certain serious penalties but asserts a much higher overall penalty than the Streamlined Procedure and it assures taxpayers that they will have a perfectly clean slate.

Questions 2: What is the standard of “willfulness” that prevents a taxpayer from entering the Streamlined Program?

Answer:   The test for willfulness is whether there was a voluntary, intentional violation of a known legal duty.  A finding of willfulness must be supported by evidence of willfulness.  The burden of establishing willfulness is on the Internal Revenue Service and if is determined that the violation was due to reasonable cause, the willfulness penalty should not be asserted.

The United States has finally caught up with the Global world when it comes to taxation. Three new laws are now in place to insure, as much as possible, that individual Americans and resident aliens will pay tax on their worldwide income.

Under the first new law known as the Foreign Accounts Compliance Act (“FATCA”), (“Foreign Asset Reporting”) beginning with the year 2011 annual income tax returns, there are new reporting requirements in place for U.S. individual taxpayers and U.S. entities. These laws require specified foreign assets that must be disclosed and reported on an information return that is filed together with the Federal income tax return.

At the same time that these more stringent disclosure of offshore assets is being demanded; the IRS has agreed to an open ended continued amnesty program for taxpayers who have not properly reported or paid tax on their worldwide income (the “Amnesty”). Unlike previous Amnesties, there is no time period to this latest program. However, I.R.S. has warned it can stop the Amnesty Program whenever it wants. The Amnesty Program charges a harsh fine but permits a taxpayer to avoid criminal penalties and a number of wealth destroying civil penalties that can be imposed on a U.S. Taxpayer who has not paid U.S. taxes on foreign bank deposits and other foreign assets.1/ 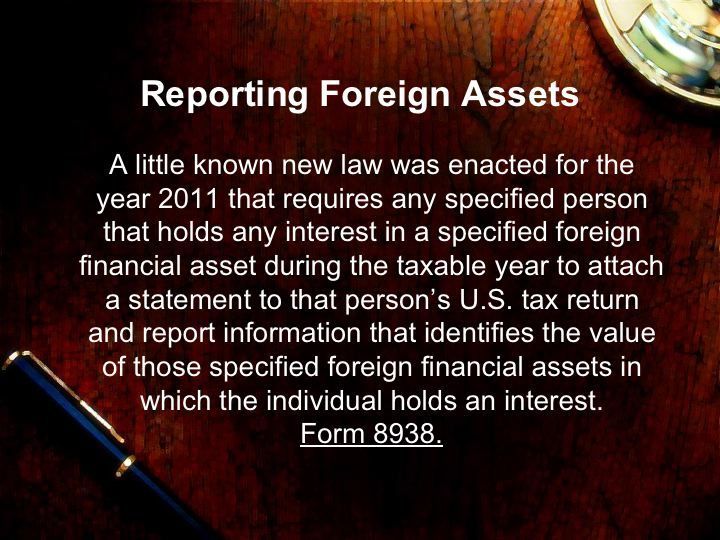 PART I – THE AMNESTY

A U.S. Taxpayer (the “Taxpayer”) with undisclosed foreign accounts or entities and other assets, should make a voluntary disclosure because it enables the Taxpayer to become compliant, avoid substantial civil penalties and generally eliminate the risk of criminal prosecution. Making a voluntary disclosure also provides the opportunity to calculate, with a reasonable degree of certainty, the total cost of resolving all offshore tax issues.

The following is a list with a short explanation of each potential civil and criminal penalty that is avoided by accepting the Amnesty terms.

There are Fraud Penalties that result only in Civil Penalties. These penalties can be almost as high as the tax that has been avoided.

The failure to report and pay taxes on foreign income and bank account by US. Taxpayer can also result in Criminal Penalties.

All of this can be avoided by entering into the I.R.S. Amnesty Program. However, the cost is high.

The present Amnesty program provides a tax, interest and penalty framework. Individuals must pay their taxes on any unreported income, 20% penalty on the total unpaid taxes and interest on the amounts due. In addition, individuals must pay a onetime penalty of 27.5 percent of the highest aggregate balance at any one point in time of their foreign bank accounts or entities during an eight (8) year period prior to the disclosure. Some taxpayers will be eligible for 12.5 percent penalties instead of the 27.5% penalty.

Taxpayers who have undisclosed offshore accounts or assets are eligible to apply for IRS Criminal Investigation’s Voluntary Disclosure Practice and penalty regime for an eight year maximum disclosure period.

Corporations, partnerships, and trusts and other entities are eligible to make voluntary disclosures.

Taxpayers who reported and paid tax on all their taxable income for prior years but did not file FBARs should file the delinquent FBAR reports according to the FBAR instructions and attach a statement explaining why the reports are filed late. The IRS will not impose a penalty for the failure to file the delinquent FBARs if there are no underreported tax liabilities,

Notice of Qualification for Amnesty

Taxpayers or representatives may file to the Criminal Investigation Lead Development Center identifying information (name, date of birth, social security number and address) and an executed power of attorney (if represented) to request pre clearance before making an offshore voluntary disclosure.

Criminal investigation will then notify taxpayers or their representatives via fax whether or not they are cleared to make an offshore voluntary disclosure.

The terms of the Amnesty require the taxpayer to pay the tax, interest and accuracy related penalty and other penalties with their submission. However, it is possible for a taxpayer who is unable to make full payment of these amounts to request the IRS to consider other payment arrangements.

The burden will be on the taxpayer to establish inability to pay, to the satisfaction of the IRS, based on full disclosure of all assets and income sources, domestic and offshore, under the taxpayer’s control. Assuming that the IRS determines that the inability to fully pay is genuine, the taxpayer must work out other financial arrangements acceptable to the IRS to resolve all outstanding liabilities in order to be entitled to the penalty relief under this initiative.

The penalty applies to all assets directly owned by the taxpayer, including financial accounts holding cash, securities or other custodial assets, tangible assets such as real estate or art and intangible assets such as patents or stock or other interests in a U.S. or foreign business, if the assets were acquired with funds that evaded the payment of U.S. taxes. Whether such assets are indirectly held or controlled by the taxpayer through an entity or alter ego, the penalty may be applied to the taxpayer’s interest in the entity or, if the Service determines that the entity is an alter ego or nominee of the taxpayer, to the taxpayer’s interest in the underlying assets.

The Amnesty cannot be taken in parts. If any part of the offshore penalty is unacceptable to the taxpayer the case will be examined and all applicable penalties will be imposed. After a full examination, any tax and penalties imposed by the Service on examination may be appealed.

Voluntary disclosure examiners do not have discretion to settle cases for amounts less than what is properly due and owing. However, because the 27.5% percent offshore penalty is a proxy for the FBAR penalty, other penalties imposed under the Internal Revenue Code, and potential liabilities for the voluntary disclosure years, there may be cases where a taxpayer making a voluntary disclosure would owe less if the especial offshore initiative did not exist. Under no circumstances will taxpayers be required to pay a penalty greater than what they would otherwise be liable for under the maximum penalties imposed under existing statutes.

Taxpayers who meet all four of the following conditions will entitled to the reduced 5% offshore penalty (a) did not open or cause the account to be opened (unless the bank required that a new account be opened, rather than allowing a change in ownership of an existing account, upon the death of the owner of the account; (b have exercised minimal, infrequent contact with the account, for example, to request the account balance, or update accountholder information such as a change in address, contact person, or email address, (c) have, except for a withdrawal, closing the account and transferring the funds to an account in the United States, not withdrawn more than $1,000 from the account in any year for which the taxpayer was on compliant, and (d) can establish that all applicable U.S. taxes have been paid on funds deposited to the account (only account earnings have escaped U.S. taxation).

1 While the Amnesty Program has no time deadline; there is in fact a practical deadline. The third law, which does not come into effect until 2014 will require foreign institutions to report all U.S. investors to the I.R.S. Once a Taxpayer is under I.R.S. investigation, the Amnesty Program is no longer available.

2 PFIC Special Taxation. A significant number of investments involve Passive Foreign Investment Companies (“PFIC”). These investments will often add to the taxable income calculation since there may be accrued gains to account for. A lack of historical information on the cost basis and holding period of many PFIC investments makes it difficult for taxpayers to prepare statutory PFIC computations and for the Service to verify them. In order to not unduly delay matters, the I.R.S. has offered taxpayers an alternative to the statutory PFIC computation that will resolve PFIC issues on a basis that is consistent with the Mark to Market methodology but will not require complete reconstruction of historical data.

3 Some Taxpayers can breathe a sigh of relief and can avoid the Bank Deposit penalty and other penalties if they reported their offshore income even though it was never disclosed in Information Returns.