I want to make everyone aware that there is actually two different programs.  One applies to Americans who live in America. The other one applies to U.S. taxpayers who have been living offshore, and have only some minor ties with the U.S.  Simply because they are U.S. citizens or green card holders or have had certain amounts of time in the U.S. they will have different eligibility requirements and a much lower penalties or actually no penalties at all.

Today we talk about the eligibility requirements for those who are living in the United States.

American taxpayers who have been living in the United States. 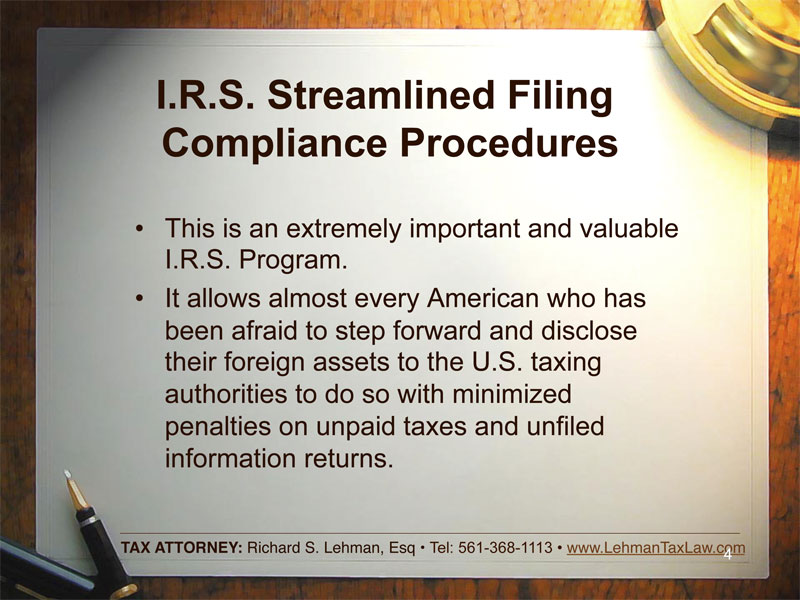 First, they need to be resident either green card holders citizens or U.S. taxpayers because of their time that they spent in the United States.

Second, the requirement is that they have filled U.S. tax returns and they now want to comply and make sure that all of their foreign income is reported.

Third, they have not filed the appropriate information returns such as the returns that require them to report foreign bank accounts. Plus the more recent returns that have required Americans to report all of their foreign assets that produce income.

The last requirement is that their conduct has not been willful misconduct.

This is where it’s important that everyone consult with a professional before they get involved in this IRS program. You’ve got to have your non-filing behavior reviewed by a professional because they’re a big decision here. It is to make sure that that there is non-willful conduct and to distinguish it from willful conduct.

It is important to remember — the taxpayer is getting involved in a program that can really knock him in the teeth.  You are disclosing and exposing all kinds of things, and just putting it in the Internal Revenue Services hands, whatever they need to proceed.

There has got to be a good look at whether one fits in the willful category or not – before entering into this IRS program.