The business world is going to be a tough place for the American exporter in 2013. The dollar will remain strong, keeping U.S. goods high priced, trade to the Euro zone will weaken while the cheap euro makes the Euro Zone highly competitive as exporters. China will contract and desperate competitors and countries will be trying even harder to protect their own. With export profits hard to come by, U.S. taxpayers that sell, lease or license “export property” which is manufactured, produced or grown in the United States (not more than 50% of which attributable to U.S. imports), can take advantage of strong support for their export profits in the Internal Revenue Code.

Export profits can produce substantial tax benefits with little more than establishing a new corporation dedicated almost exclusively to export profits; a separate set of export books and records, and abiding by a relatively simple set of rules that govern Domestic International Sales Corporations (now known as “IC-DISC). Rather than being organized as a mere “paper” entity for receipt of commission income only, an IC-DISC can have more substance and engage in additional export-related activities such as promotional activities, thereby enhancing its income and the benefit of the advantageous tax rates to shareholders.1/

In its simplest terms, the IC-DISC is a separate corporation. The income received by the DISC is not taxable to the DISC. The DISC is charged with accounting separately for a U.S. “taxpayer’s export profits” and receives more than 50% of the export profits free of any U.S. taxation.2/

The existence of the DISC will be transparent to the export company’s customers. The exporter will continue to operate its business in the same manner and its employees will continue to perform the company’s manufacturing, sales, billing, shipping and collection functions. The fact that there is a commission agreement between the exporter and the DISC will not have to be disclosed to the exporter’s customers and no documentation provided to the customers will need to indicate the existence of, or services deemed provided by the DISC.

Architects and engineers may also be surprised to learn that their services can also qualify of DISC benefits for construction projects located outside of the U.S. if professional services related to those projects can be performed in the United States.

What are the IC-DISC rules that need to be obeyed?

The IC-DISC must sell, lease, license or service “export property”

Services can also be provided by the I.C. DISC if such services are provided by the person who sold or leased the export property to which such services are related. The DISC acts as a commission agent with respect to the sale or lease of such property and with respect to such services that cannot exceed a certain amount of the value of the transaction. The service must be of the type of customarily and usually furnished with the type of transaction in the trade or business in which such sale or lease arose.

Essentially, as a practical matter, this means all IC-DISC gross receipts should be devoted almost totally to the IC-DISC operation. There is no reason to violate either of these formulas. However, there is no requirement that the IC-DISC be an actual operating company except the corporate form must be respected in all regards as with any other corporation.

“Thus the magic of the IC-DISC is to provide both tax deferral and to apply a 15% maximum dividend tax rate to profits that would otherwise be taxable in the U.S. taxpayer’s highest brackets that can range as high as 50% when city, state and federal income taxes are calculated.”

The benefits of the IC-DISC come in two separate fashions. The IC-DISC shareholders may leave the IC-DISC profits in the IC-DISC and defer taxation until actual distribution of the profits or the IC-DISC may distribute profits to its shareholders like any other corporation. Since IC-DISC distributions are considered “qualified dividends” they are subject to a maximum tax of 15%. Thus the magic of the IC-DISC is to provide both tax deferral and to apply a 15% maximum dividend tax rate to profits that would otherwise be taxable in the U.S. taxpayer’s highest brackets that can range as high as 50% when city, state and federal income taxes are calculated.2/

Typically the IC-DISC is established, by a related company that is engaged in a United States business that includes gross revenues from both domestic and international sources. The related company’s principals will be the direct or indirect owners of the IC-DISC that may be owned directly or any transparent entity, that may be a partnership, or a disregarded entity, such as a one person limited liability company.

For the maximum tax advantage the IC-DISC shareholders should avoid double taxation by acting as individual shareholders or using disregarded entities and/or pass through entities. The IC-DISC corporation itself must be a c corporation and may not elect Sub chapter S status. 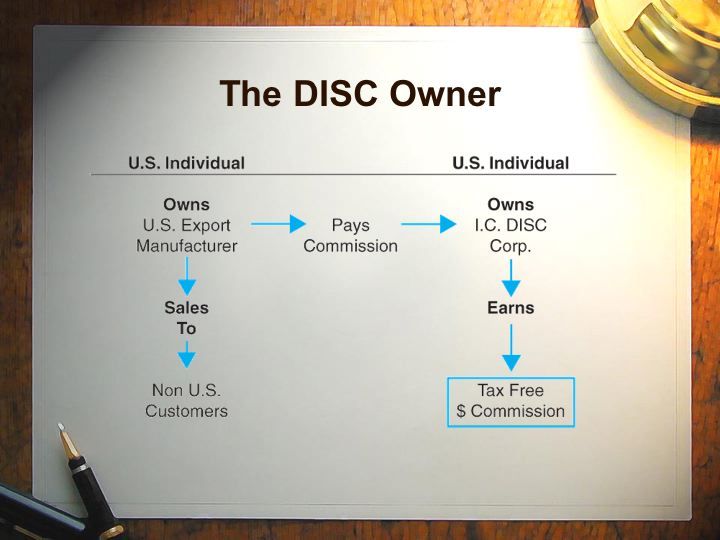 There is a cost to take advantage of the tax deferral tax benefit available using an IC-DISC. However, in today’s climate and for the foreseeable future, the cost is minimal. The IC-DISC rules provide that an “interest charge” must be calculated on IC-DISC distributions that are not paid as taxable dividends in the year earned. However, that interest charge is the same as the rates charged on one year Treasury bills that have been ranging at less than 1% per annum. Thus at this time a U.S. Taxpayer may defer the U.S. income tax on 50% or more of its export profits at a cost of less than 1% per year and then eventually distribute those export profits and their tax free earnings at the 15% U.S. dividend rate.

However, it is extremely important that U.S. taxpayers not be misled by the $10,000,000 annual cap on tax free income that is permitted by an IC-DISC. This $10. Million annual cap does not require the DISC pay taxes on its income of IC-DISC profits over $10.0 Million. The DISC remains tax exempt. This means that IC-DISC profits in excess of $10 Million annually will be immediately taxed to the shareholders as a DISC dividend.

The commission payments will depend upon the pricing methodology chosen by a DISC to record its share of commission income at the greater of any of the following three pricing arrangements:

Under the gross receipts method of pricing, the transfer price for a sale by the related supplier to the DISC is the price as a result of which the taxable income derived by the DISC from the sale will not exceed the sum of (i) 4 percent of the qualified export receipts of the DISC derived from the sale of the export property and (ii) 10 percent of the export promotion expenses of the DISC attributable to such qualified export receipts.

“Export promotion expenses” means those expenses incurred to advance the distribution or sale of export property for use, consumption, or distributions outside of the United States but does not include income taxes.

If the rules of the preceding paragraphs are inapplicable to a sale or a taxpayer does not choose to use them, the transfer price for a sale by the related supplier to the DISC is to be determined on the basis of the sale price actually charged but subject to the rules provided by the rules of sales between related parties.

The following are examples of the 4% Percent Gross Receipts and “50-50” Combined Taxable Income Methods of Pricing. Neither example includes any export promotion expenses. 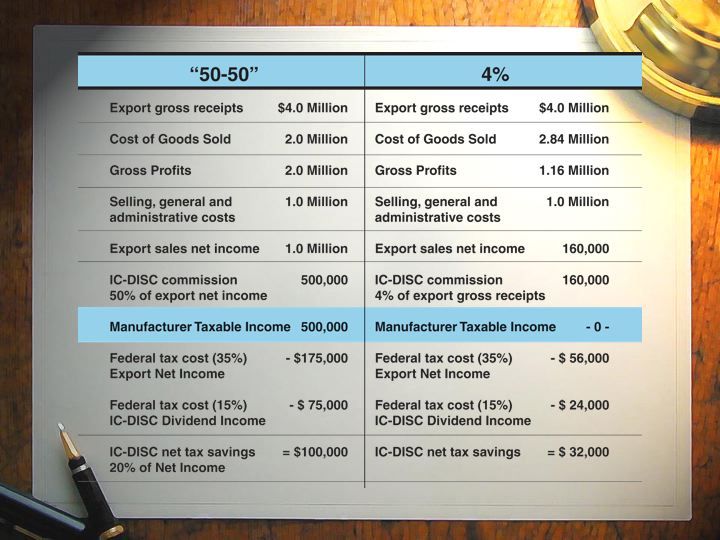 Richard S. Lehman, Esq., is a graduate of Georgetown Law School and obtained his Master’s degree in taxation from New York University.

Mr. Lehman has been practicing in South Florida for more than 37 years. During Mr. Lehman’s career his tax practice has caused him to be involved in an extremely wide array of commercial transactions involving an international and domestic client base. He has served clients from over 50 countries.