This is principally an article about tax planning for the non resident alien individual and foreign corporate investor that is planning for smaller size investments in United States real estate (“Foreign Investor”).1

As a result of 40 years of Florida real estate experiences with foreign investors that purchase condominium units, smaller homes and many other forms of U.S. real estate investments, this article also has a few practical suggestions for the Foreign Investor. 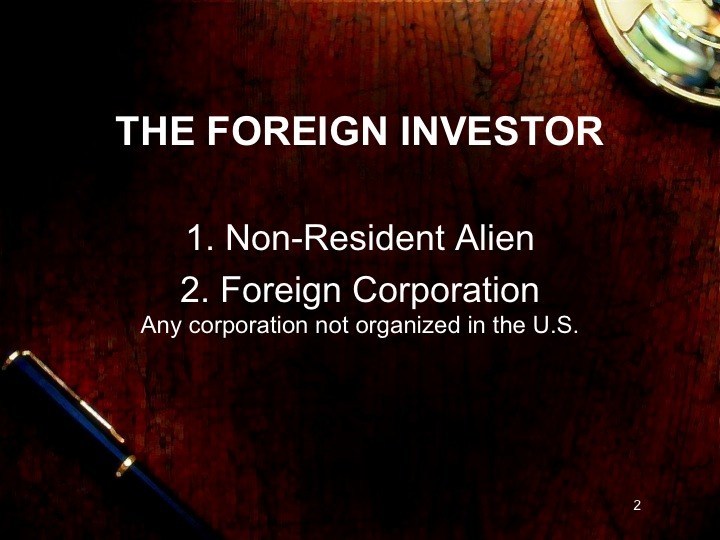 Foreign Investors are now finding that they invest both in U.S. real estate and a strong dollar at the same time.  Thus, making their investment even more valuable than ever when compared to their wealth in their own currencies.  The United States real estate market is strong and growing.

However, it is important to use only a limited amount of borrowed funds.  When an investor finances real state with large borrowings, the investor runs the risk of continuing to hold their real estate investments in hard times.  Investment in U.S. real estate can provide significant short term profits but often will fare much better when they are viewed as long term investments.

One must seek good professionals in the United States who are also knowledgeable about the needs of the foreign investor.  You must have an independent tax lawyer, real estate lawyer, an accountant a real estate broker and a property appraiser to rely on.

Tax planning for the foreign investor acquiring real estate with cash investments in the range of approximately $500,000 or less requires a look at both the U.S. income tax consequences and the U.S. estate and gift tax consequences.

The foreign investor will need to be concerned about three separate U.S. taxes. They are the income tax, the estate tax and the gift tax.2

There is a U.S. income tax that is applied on annual net income which starts at 15% and can be as high as 35% for both corporations and individuals. There is a tax on capital gains from the sale of assets which is only 15% to an individual taxpayer, but may be as high as 35% to a corporate taxpayer.

There is an estate tax when a non resident alien individual dies owning U.S. real estate or shares of certain types of entities that own U.S. real estate. The first $60,000 of value is excluded. Thereafter this estate tax can be as high as 45% of the equity value of the real estate.

There is also a gift tax if a non resident alien individual gifts U.S. real estate to a third party. This can be as high as the estate tax, depending upon the value of the gift.

With all of this in mind we can review the various options of U.S. real estate ownership.

An individual foreign investor may own U.S. real estate in his or her own individual name. This represents the simplest form of ownership with the least amount of paperwork involved. If it is rented out the individual owner will have to file a U.S. income tax return reporting the U.S. income.This form of ownership is only chosen by a small percentage of foreign investors. This is for at least two reasons. The first reason is liability. The owner of U.S. real estate will be personally liable for any damages that result from that real estate. While often insurance is more than sufficient to cover such claims, most investors do not want to expose themselves personally to individual liability.Furthermore, investors from many countries are fearful of revealing their wealth for security reasons. An investor’s individual name as an owner of real estate will appear in the public records where that real estate is located.This form of ownership does however provide the best income tax benefits. The individual investor will pay tax only on the investor’s U.S. income and will probably only pay a tax from operations in a relatively small tax bracket. The tax on the profit from the gain from the sale of the real estate will be only 15 to 20%. If one does choose to own U.S. real state individually, the foreign individual investor will be subject to an estate tax in the event that investor was to die owning the U.S. real estate.

First, if f the foreign investor intends to ultimately make a gift of his shares in a United States company that owns U.S. real estate to third parties, such as family members, etc., there will be no U.S. gift tax asserted on the gift of those shares. There would have been a U.S. gift tax had the real estate been given directly. Thus, the gift tax may be avoided if shares in a United States corporation are transferred prior to the foreign investor’s death. By gifting the shares the original owner will avoid the estate tax. 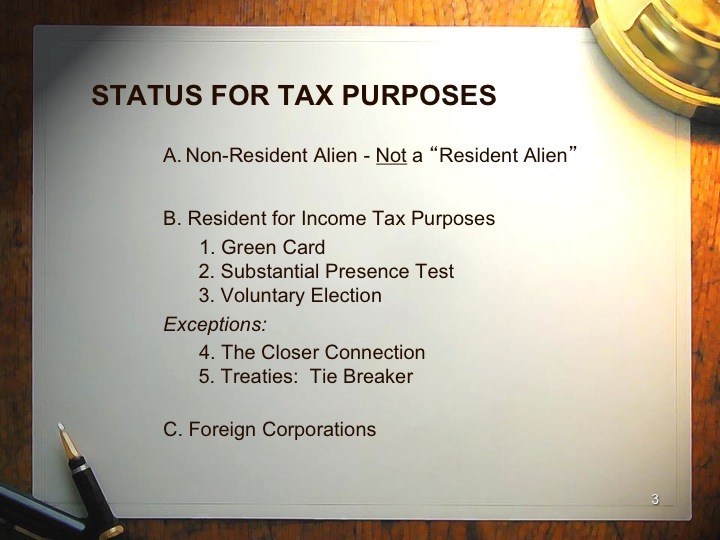 This double tax problem can be eliminated with careful tax planning.

There is another alternative to having the best of both worlds, which is to pay United States income taxes as an individual investor or as a limited liability company while not being concerned with the effect of United States estate taxes in the event of a premature death. That alternative is for the foreign investor to acquire sufficient “term life insurance” that pays only a death benefit for the contemplated life of the investment.

One must seek good professionals in the United States who are also knowledgeable about the needs of the foreign investor. You must have an independent tax lawyer, real estate lawyer, an accountant and several property appraisers to rely on.

Richard S. Lehman is a graduate of Georgetown Law School and obtained his Master’s degree in taxation from New York University. He has served as a law clerk to the Honorable William M. Fay, U.S. Tax Court and as Senior Attorney, Interpretative Division, Chief Counsel’s Office, Internal Revenue Service, Washington D.C. Mr. Lehman has been practicing in South Florida for more than 35 years. During Mr. Lehman’s career his tax practice has caused him to be involved in an extremely wide array of commercial transactions involving an international and domestic client base.