FIRPTA Witholding Rate To Increase To 15%

This is an excerpt from the presentation; Advanced Tax Planning for Foreign Investors in United States Real Estate includes FIRPTA update. Presented by Richard S. Lehman to the Florida Realtors Global Networking Forum.

Effective February 16, 2016 FIRPTA general withholding rate increases from 10% to 15% effective for closings on or after February 16, 2016 in the United States.  Closing agents should adjust their procedures and forms to reflect this change.

The 10% rate will still apply for those transactions in which the property is to be used by the Transferee as a residence, provided the amount realized (generally the sales price) does not exceed $1,000,000, and the existing $300,000 “exemption” remains unaffected.

Here Are Your New FIRPTA Guidelines:

The well-documented flaws and risks of the $300,000 exemption will likely continue although future regulations could change existing procedures.  The Transferee’s intent to use the property as a residence should be documented as best they can and point out to the Transferee the risks of allowing the exemption to apply to their transaction.

The current FAR/BAR contract form contains language specifically referring to a 10% withholding.  An amendment to the contract for closing scheduled on or after February 16, 2016 should be added to change the potential rate of withholding to 15%. 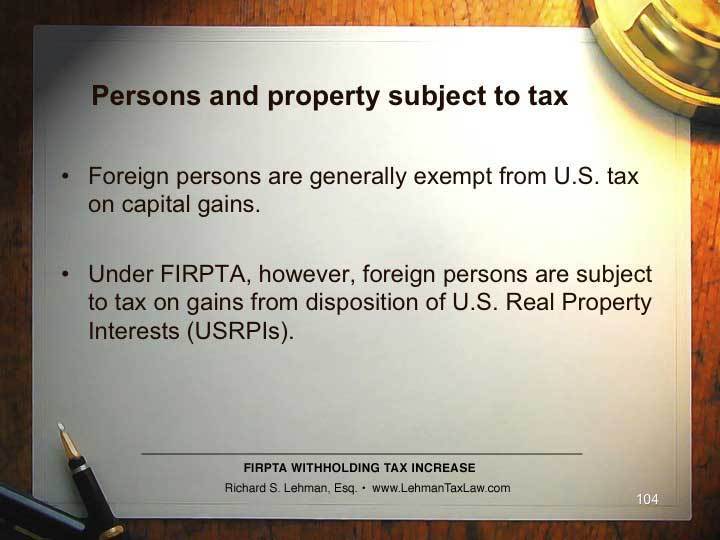 Do you have a question about the FIRPTA updates?

By Lehman Tax Law | Posted on January 29, 2016
« The top 10 questions about tax incentive for exporting from the United States
A General Overview of United States Taxation and Foreign Investors »
Share This Page: